Home » Using PRP for Erectile Dysfunction: Yes or No? 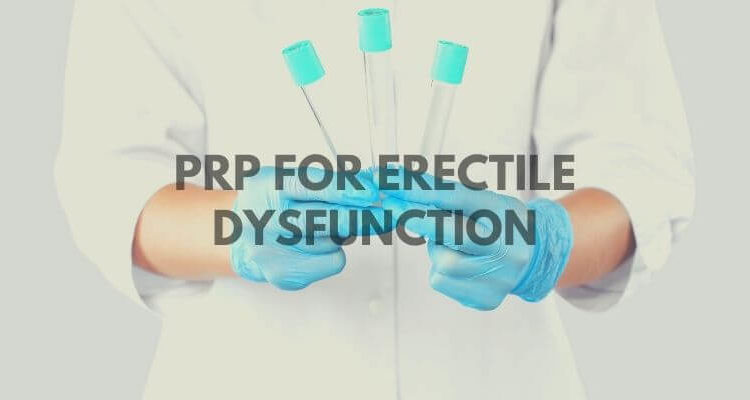 One of the most significant advancements to society today is the improvements in medicine. An example of this is a process called the Platelet-Rich Plasma therapy or also known as PRP. PRP for erectile dysfunction has been gaining popularity for this medical issue.

Platelet-rich plasma is a property in your blood that assists in healing and tissue regeneration. Our blood consists of four compositions: red blood cells, white blood cells, platelets, and plasma. The latter two are the ones who are responsible for healing and closing wounds.

Plasma carries some essential proteins that are often used for medical treatments.

It is also used for a variety of sexual treatments, and that includes erectile dysfunction.

What Does PRP Do For Erectile Dysfunction?

Numerous studies have discussed the effect of PRP on ED. The idea behind these studies is that PRP treatments can revitalize DNA health blood vessels, which results in better blood flow. Blood flow then greatly helps in getting a penile erection during times of sexual intercourse.

Measuring tools that are often involved include intracavernous pressure, ultrasound, pathologic analysis, questionnaires, and other similar clinical trials. These allow for multiple perspectives and a more in-depth understanding of the effects of PRP on erectile dysfunction (1).

Now we’re going to go into more detail about a research done on PRP and its effect on urological problems.

The experiment involved subjects with various urological conditions, including erectile dysfunction, Peyronie’s disease, and stress urinary incontinence. All of them were injected and observed for up to 30 minutes after infection. The follow-up check-ups lasted for several months.

Their results found that there were no harmful side effects except for mild penile bruising in some patients. Their ages ranged from 21 to 60 years old, so the possibility of age factoring into the side effects has yet to be determined. Overall though, it showed some promise in reducing the impact of it, but nothing conclusive as of yet.

How does PRP help with erectile dysfunction?

Well, what it does is increase overall blood flow by repairing the veins and relaxing the muscles. It also creates new neural pathways, so those who take it can expect to feel more stimulated. This is especially helpful because it is often another cause of ED.

Lastly, there is something to be said about the placebo effect of taking platelet-rich plasma therapy, but that varies on a case to case basis.

Side Effects of Using PRP

Though generally safe, it would still vary on the person’s body. The universal rule is to always keep watch for side effects because there will always be a chance that you’re not compatible with a particular treatment.

However, most of the side effects associated with it are less about the treatment itself but the act of injection. These include:

With anything involving needles, there is a slight risk that a nerve or vein will be hit and cause injury. This kind of side effect is not just limited to PRP, and it is often caused by damaged needles or using one that is too large or too small. Similarly, an infection can also occur if the needles were not adequately disinfected.

A bit of scarring can occur when injecting as well, but aside from aesthetic problems, it’s completely harmless. Massaging the area where you injected can actually reduce this effect.

Considering the area being affected, take note of any swelling and redness, especially if they are prolonged. This could be an allergic reaction or worse.

Overall, platelet-rich plasma therapy is a very viable option with minimal harmful side effects. When done right, it could prove to be effective, though no conclusive research has fully banked it.

One way to ensure your safety during this procedure is to find a highly certified and professional staff—no going for the cheaper option for this method.

Using PRP for erectile dysfunction is a great option that you can try. It is historically known for healing, so you have reason to believe that it can help. Mostly, what it does is increase blood flow and sensitivity.